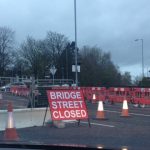 It's hoped Traffic congestion in Strabane caused by traffic works will ease following a review of how work on an urban renewal project will proceed.

Some business owners and motorists alike have complained about traffic jams caused by the works on Bridge Street since they began last Tuesday.

After reviewing the situation, DRD District Manager Declan Mc Bride has confirmed changes to how the work will be carried out.

Under the news system...

This normal two way traffic flow will remain in place up to and including Sunday 11th May. The one way temporary traffic management system will be reintroduced on Monday 12th May.

There will be no resurfacing road works taking place from midday 18th April until Sunday 27th April. Site works will recommence on Monday 28th April 2014.

These changes have been made possible by selecting stretches of footway and breaking these stretches into smaller zones. One of these zones can be resurfaced with two way traffic flow in operation.

These changes may affect the delivery timescale for these works. The management of the works is continually under review, to ensure that the works are carried out without risk to the health and safety of any person.