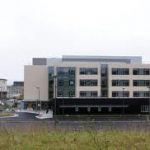 A Donegal representative on the HSE West Regional Forum has criticised the amount of time it's taken to provide information on the cost of an excavator which is on permanent standby at Letterkenny General Hospital.

The appliance, understood to be there on the insistence of the hospital's insurers, is to ensure that the culvert can be cleared immediately in the event of future flooding.

However, it emerged at a forum meeting this weekend that since the flooding last July, it's cost almost 1,000 euro a week to keep the excavator on site.

Cllr Michael Mc Bride is of the forum members who has raised the issue, he says those questions were first asked last year..........