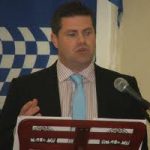 He says while these initiatives are welcome, it means that between Creeslough and Dunfanaghy there are approximately 119 posts carrying various signs erected by Donegal County Council and the NRA.

Cllr O'Domhnaill says agencies need to work together to come up with a more ensure that better signage protocols are implemented............