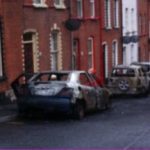 Three cars have been destroyed and homes damaged in a fire at Moat Street in Derry.

The Fire and Rescue Service said 15 people had to leave several homes which were also damaged in the blaze.

The area has been cordoned off by police. The fire is being treated as deliberate.