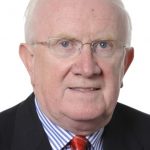 The "Net Children Go Mobile" report, which has just been published, follows two years of research in Ireland, the UK, Denmark, Italy and Romania.

The report finds that 27% of respondents were bullied, 14% of them on the internet or via their mobile phones.

North West MEP Pat the Cope Gallagher says the report is deeply concerning, particularly in the wake of the deaths of a number of teenagers including Erin and Shannon Gallagher in Donegal.

He's urging people to become involved with an EU awareness programme, saying he believes education is the key............