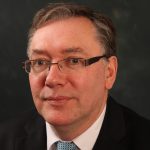 A local election candidate in Letterkenny/Milford area, has once again called on fellow candidates to remove election posters erected over the weekend.

Peter Cutliffe raised the issue a week ago over posters erected at Pole Star and Mountain Top Roundabouts, those posters were subsequently took down.

Another poster from the same Fianna Fail candidate has now appeared at the station roundabout beside Tesco.

Mr Cutliffe says it his understanding that candidates who erect posters before April 23rd are breaking the litter laws.....