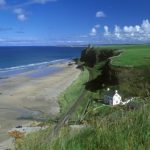 A 30-year-old man from Fahan in County Donegal has been jailed for a driving incident on Benone Beach which left a mother and her four-year-old daughter in hospital.

Paul John Doherty of Ballynahone in Fahan admitted seven driving charges including two charges of dangerous driving, two of driving with excess alcohol and failing to report, remain at the scene and stop at the scene of an accident on July 21 last year.

Passing sentence Judge Philip Babington described the driving as 'outrageous and obviously dangerous'. The court was told that Doherty's car was swerving from side to side and performing handbrake turns.

The vehicle narrowly missed a three-year-old child and then struck Diane Wilkinson and her four-year-old daughter Abbie who she had 'instinctively' picked up into her arms.

Abbie Wilkinson suffered a broken shoulder and a black eye while her mother was severely bruised, both were kept in hospital overnight.

Following the incident Doherty sped off and a police car on its way tot he scene saw his vehicle and gave chase but had to give up due to the dangerousness of the driving.

A police helicopter was deployed and Doherty's car was found behind a house with the number plates removed.

Doherty himself was located a short distance away and made to run off but stopped when police called to him.

He admitted 'messing about on the beach' but refused to tell police who had been in the car with him at the time.He also admitted having taken two cans of beer and his reading was twice the legal limit.

The court heard that Doherty had two convictions for dangerous driving in the Republic one in 2003 and one in 2005 both involved doing handbrake turns.

Judge Babington said that family of the victims 'have been traumatised by what happened at Benone Beach' and added: "This is particularly galling for them as Mrs. Wilkinson and her family, including her parents, have retained a caravan in this area for the past twenty eight years."
The judge said that the use of alcohol, the injuries caused and the 'particularly aggressive' driving were all aggravating factors.

Doherty, Judge Babington said, 'was caught red-handed and indeed was in the process of escaping when police were able to apprehend him.'

Describing the incident as 'appalling ' Judge Babington said it was 'fuelled no doubt by alcohol' and added that a custodial sentence was inevitable. He sentenced Doherty to three and a half of which 21 months will be in custody and disqualified him from driving for a period of seven years.

Speaking afterwards Richard Wilkinson the father of the child said they had been expecting a suspended sentence but were 'gald it was custody.' He revealed that when he took his daughter back to the beach in October she squealed and it took half an hour to coax her to get out of the car.

Welcoming the sentence Mr. Wilkinson said: "A suspended sentence would not have been good enough. "And this is a good thing, a strong message to send out to everyone else who would behave like this."