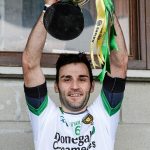 Donegal were crowned champions of Division 3a of the National Hurling League on Sunday.

Donegal stormed into a 3-9 to 0-6 lead at half time but Roscommon bounced back in the 2nd half at at one stage there were just 3 between the sides.

Donegal held on to win and will now meet Fingal next weekend in a promotion relegation play off to see who will play in Division 2b next season.

Donegal Manager Ray Durack was delighted to make up for the disappointment of losing out in the league final last year.