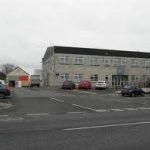 Fifty jobs at Fivemiletown Creamery in County Tyrone could be lost after shareholders decided to sell it to an Irish company.

After negotiations that ran into the early hours of this morning, Glanbia Ingredients Ireland agreed to buy the milk supply and Fivemiletown cheeses.

This effectively ends processing in the town.

The sale of Fivemiletown Creamery has been inevitable for a some time because the company has been making a loss for the past two years.

In their statement, the board of directors said they regretted the likely closure of the plant and the resulting loss of jobs.

While Fivemiletown's Ballyblue and Ballybrie cheese brands were popular, they only took a small proportion of the milk. The business is another victim of the pressure for scale in dairy processing.

The 50 jobs are at the independent specialist cheese-making factory.

A number of staff held a protest outside a local hotel as shareholders met bidders last night.

The Ballylurgan Road premises was put up for sale following a downturn caused by the loss of a major contract and difficulties in acquiring milk.

The factory has been running since 1898. Its closure brings to an end an era of milk processing in the Clogher Valley.

Consultation will now begin with staff who had fought the closure.