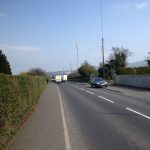 Police in Strabane say that a suspect object discovered near Strabane
Golf Course earlier was designed to kill officers.

A device, described as being larger than a pipe bomb, was found at the
gate adjacxent the third hole of Strabane golf course.

Hundreds of school children passed the device on their way to school
this morning, it has been confirmed.

Officers received a call about anti-social behaviour on the
Ballycolman Road at around 9pm last night, it's believed this was an
attempt to lure police into the area.

The device has now been made safe.

Speaking earlier Strabane Golf Club PRO Tommy Forbes said a number of golfers and greenkeepers passed were the device was found, he says someone could have been injured: