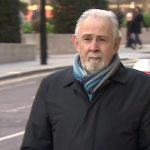 The PSNI has committed to review evidence against all those who were awarded letters of comfort as part of an "On the Runs" scheme.

The DUP group leader on the Northern Ireland Policing Board, Jonathan Craig, has welcomed the review.

Last month, the British Prime Minister David Cameron announced that a judge would conduct a review of the covert deal, which allowed IRA suspects on the run to escape prosecution.

It came after the collapse of the trial of Donegal man John Downey in London last month because he had received such a letter. First Minister Peter Robinson subsequently threatened to resign over the issue, unless a review was ordered.