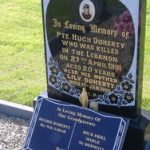 The Justice Minister has given a commitment to meet the family of a Letterkenny soldier who was murdered while serving with the UN in Lebanon.

Minister Alan Shatter confirmed in the Dail yesterday that he will meet members of the family “either this side of Easter or shortly afterwards.”

Hugh Doherty, was shot dead during the raid on a post near the village of Dyar Ntar on April 27th 1981. Private Doherty, who had just turned 20, was shot three times in the back.

Hugh Dohertys sister Vanessa Nee has welcomed the announcement that the Justice Minister is to meet them: