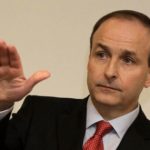 The Fianna Fail party has passed a motion from Donegal North East delegates calling for active and serious participating and engagement in the political process in Northern Ireland.

The motion was passed without debate at The Fianna Fáíl Ard Fheis which is taking place this weekend.

The party's leader Micheál Martin has now confirmed Fianna Fail's intention to stand candidates for election in Northern Ireland in 2019.

A Donegal North East motion protesting at the holding of the Ard Fheis repeatedly in Kerry was also passed.