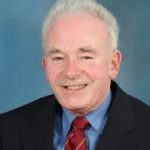 Veteran Cllr Victor Fisher has quit Fianna Fail after claiming he was “shafted” by the party he has served for 45 years.

The former Mayor of Letterkenny says he is deeply hurt that he was not asked to stand for election by the party in the forthcoming local elections.

And the local businessman said he is also outraged that his son David was not chosen.

Speaking to Highland Radio News, Mr Fisher said he had no choice but to resign from the party.

He now says he or is son may run as independent candidates: