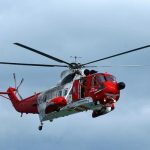 A man who was rescued from Lough Ree after a boating accident yesterday afternoon has died in hospital.

The man in his 20's was one of two who were taken from the water and brought to Portiuncula hospital in a critical condition.

He was later transferred to University College Hospital in Galway where he passed away overnight.

Meanwhile, search efforts have resumed this morning to find a third man also believed to have been on the fishing boat when it got into difficulty.

The operation is being coordinated by Malin Head Coastguard