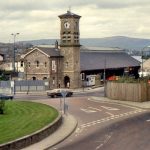 The lobby group Into the West is calling on the North's Regional Development Minister to clarify his intentions for the old Waterside Railway Station in Derry.

Yesterday, it was confirmed that the outcome of a public consultation on the future of rail services showed a clear majority in favour of refurbishing and reopening the facility. Minister Danny Kennedy subsequently issued a statement saying he wants to see the old station developed as a transport hub.

Martin Melaugh of Into the West says this is a welcome statement, but he says the minister needs to elaborate on his vision, particularly as his statement did not mention trains........