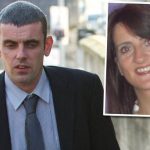 A drink-driver who killed a pregnant Co Donegal woman in a car crash has been sent back to jail after a judge ruled an original sentence was unduly lenient.

31-year-old Kevin McArdle of Longfield, Carrickmacross, was given four years in prison, with the final year suspended, at Monaghan Circuit Court in October 2011 for dangerous driving causing death.

McArdle, who was released last August, has been sent back to prison for a year.

He drove his BMW head-on into a car driven by Stephen Connolly on December 27, 2010.