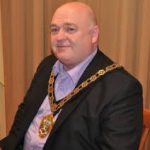 The Chairperson of Omagh District Council is calling for a review of car parking charges in the town, saying that the high number of parking tickets issued over the past year is a turn off to shoppers.

Councillor Martin McColgan says drivers in Omagh received the most parking tickets in County Tyrone, with 3,979 issued last year. That, he says, amounts to over 70 tickets issued every week, and is double the amount issued in Cookstown, Strabane and Dungannon.

Cllr Mc Colgan says reduced rates which were introduced over Christmas should be implemented on a year round basis to stimulate town centre trade.............