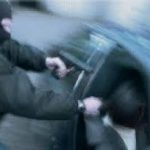 Two men are being questioned after a 63-year-old man had his van hijacked in Derry yesterday morning.

Tom Agnew told the BBC he suffered a broken cheekbone after he was punched in the face by thieves who forced him out of his van in De Burgh Terrace at 10 o'clock yesterday morning.

The vehicle was  involved in a crash and set alight a short time later at Groarty Road in the city.