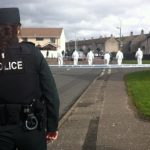 Two men have been arrested by police investigating pipe bomb attacks in the Waterside area of Derry in the early hours of Saturday.

The men, one aged 40 and the other 32, were arrested in the city this morning.

The PSNI are treating the bomb attacks as hate crimes.

Two Romanian families were targetted in two houses in the Waterside area in the early hours of Saturday morning.

Foyle MLA Pat Ramsey has described the incident as disgraceful: