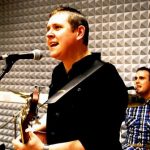 Local musician Gary Doherty has been selected by Sinn Fein to replace Cllr Cora Harvey on the Donegal County Council.

The Castlefin man, who has a degree in politics, contested yesterday's selection convention with Christina McGranaghan.

Last month Cllr Harvey announced that she would not be seeking a nomination to run in next years Local Elections, and would be stepping down from the authority.

31-year-old Gary Doherty is the bass player with Donegal band Heads of State.

He's been paying to Cllr Cora Harvey, and says he's looking forward to the challenge of serving on council ahead of next year's local elections.........