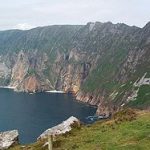 A walking tourist has been rescued from Slieve League after getting into difficulty yesterday evening.

The woman, from American, was walking with a friend when they got lost.

One of the woman managed to make her way down and raise the alarm.

In the meantime, her friend  found herself positioned in a dangerous situation in the area close to Eagle’s Nest and could not move.

The new Sligo Rescue 118 Coastguard helicopter was tasked to the scene and eventually managed to winch the woman to safety just after 9pm.

Members of Donegal Mountain Rescue Team along with their colleagues from Sligo and the Killybegs Coastguard Unit were also involved in the rescue. The woman was flown to Sligo General Hospital but was uninjured.