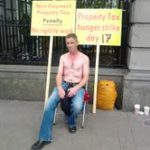 The man staging a hunger strike outside the Dáil is reported to have ended his protest.

Last night, Donegal South West Deputy Pearse Doherty announced on Twitter that Tony Rochford from Co Meath had called a halt to his fight against the property tax, after 25 days without food.

Earlier this week the Taoiseach Enda Kenny agreed to meet with Mr Rochford, after doctors told opposition TD's that the 45-year-old's blood pressure was dangerously low.