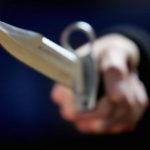 Two Strabane men arrested in connection with a robbery in Lifford on Thursday have been released on bail.

According to the PSNI, the pair, aged 46 and 47, were arrested in connection with a robbery at a filling station in Lifford.

On Thursday a man armed with a knife entered Gallagher’s Fuel Depot in Rossgier and threatened a young male member of staff. The culprit escaped initially on foot but is thought to have later entered a car and crossed the border.

A police spokesperson said Garda officers informed the PSNI that two suspects had made off in a vehicle towards Strabane following the robbery.

The suspects were later identified and arrested in Ballymagorry.

The two men have since been released on bail pending further enquiries.

Thursdays incident follows a violent spree of crime in the border area this week. On Monday two elderly sisters were attacked and robbed in their home near Raphoe while on Tuesday a Lifford filling station was robbed at knife point. A man also entered a grocery shop in Newtowncunningham with a knife on Friday, but luckily the man failed in his attempted robbery.