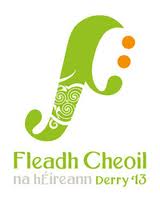 More streets in Derry's city centre are set to be closed to traffic during Augusts All-Ireland Fleadh.

Derry City Council announced last week that the Shipquay Street area would be closed to traffic during the event, which runs from the 11th to the 18th August.

Now it's understood that there are also plans in place to close off the Strand Road to traffic.

A section of the Strand Road spanning from the junction at Claredon Street to where the road meets with William Street will be closed with barriers in order to prevent vehicles accessing the area.

Derry Chamber of Commerce are welcoming the street closures, and Chief Executive Sinead McLaughlin said businesses will be hoping for a boost during the Fleadh: