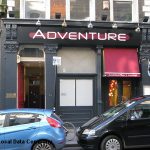 A bar in London has been slammed over its decision to name a cocktail 'Sundae, Bloody Sundae'.

The ice-cream based drink - served at the Adventure Bar in Covent Garden - comes complete with a small, green army man carrying a rifle.

14 people died when members of the Parachute Regiment opened fire on a civil rights march in Derry in January 1972.

A spokesman for the bar told the Belfast Telegraph that they are "highly apologetic" over the incident.