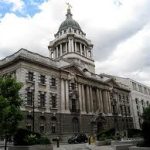 with the murder of four British solders in the 1982 Hyde Park IRA bomb blast.

The 61 year-old from Cresslough was arrested at Gatwick Airport on Sunday - he has been remanded in custody.

He was accused of being responsible for a car bomb left in South Carriage Drive which killed solders as they rode through the park to the Changing of the Guard.

The explosion injured other members of the Royal Household Cavalry and killed seven horses as they travelled from their barracks to Buckingham Palace.

Downey was charged with murdering Roy Bright, Dennis Daly, Simon Tipper and Geoffrey Young, and with intending to cause an explosion likely to endanger life.

Downey appeared via videolink at the court from Belmarsh prison.

He was remanded to a preliminary hearing before Mr Justice Sweeney at the court on June 5. No bail application was made.