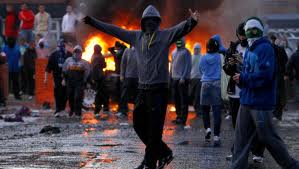 A Derry man who admitted rioting in the Currynierin area of the city was told that people like him ruined the positive image people in the city were trying to portray.

Derry Crown Court was told that there were significant disturbances in the Currynierin area and petrol bombs had been thrown.

A gang of about 20 youths one of them being McToal was throwing missiles at police.

A member of the public told police that McToal was part of the crowd and took footage of him on their mobile phone. This footage showed McToal throwing missiles at police land rovers and running away.

Judge Piers Grant said that McToal accepted that he participated in this riot. He added: "This is very serious conduct on your part. "This type of rioting very frequently leads to petrol bombing which it did in this case and your involvement encourages that sort of thing. "This puts police officers in serious jeopardy."

Judge Grant continued: "This city is trying its best to recover and the vast majority of people want to improve their lives. "The vast majority are delighted and honoured to be in the City of Culture and see it as an opportunity to show the city in a positive light."You and the likes of you ruin that. "You portray to the outside world an image of a city in turmoil."

The judge said that most cases of this type would attract an immediate custodial sentence. He told McToal that he had a record for violent offending but added: "A report describes you as someone easily bullied and led by others. "This is not an excuse but is an explanation for this behaviour."

Judge Grant said that McToal had engaged 'significantly' with probation and it was with 'considerable hesitation' that he was not going to impose an immediate custodial sentence.