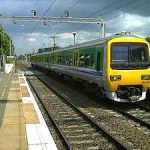 A Stormont document on the future of rail services has revealed an ambitious £1bn plan to link Derry to Sligo.

A railway line from Derry to Sligo, going through Letterkenny and Donegal Town is listed as an option in the Department for Regional Development’s Future Railway Investment Consultation paper.

But some econimists have described the Sligo link and others to Donegal and Letterkenny as a pipe dream.

Spokesperson for the rail lobby group Into the West, Eamon McCann says it's a realistic proposal: