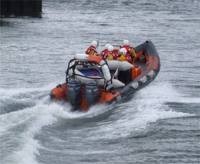 A body recovered from the river Foyle on Thursday has been identified as that of missing teenager Kieran McKeon.

The 18-year-old went missing on the 14th of March after arriving in Derry from Dublin with his friend, 21-year-old Alexandra O'Brien.

Her body was recovered from the river Foyle the following day.

Search and rescue services had continued their search for Kieran, until they recovered a body from the river Foyle on Thursday.

A post-mortem has since confirmed it to be the 18-year-old.