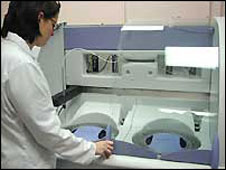 Randox in Dungloe have announced today that they are to increase their workforce significantly over the next couple of years.

Randox currently employs 42 people at its facility, but that will increase to 130 by 2015.

In September 2011 they announced details of a 1m euro investment which involved the purchase of the Dungloe facility from Údarás na Gaeltachta, and they said this would result in increased job opportunities.

Northwest MEP, Pat the Cope Gallagher has today praised the company for sticking to their word...