A new group calling on people in Donegal, Derry and Tyrone to support the proposed A5 dual carriageway has been set up  this week. 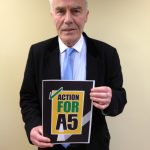 The ‘Action For The A5’ initiative has been set up by retired Professor Pat Darcy from Tattyreagh outside Omagh, who says he drove that road daily before he retired.

He believes the vast majority of people are in favour of the A5 western Transport Corridor, but they sat back and gave the initiative to protesters because they assumed the road would go ahead.