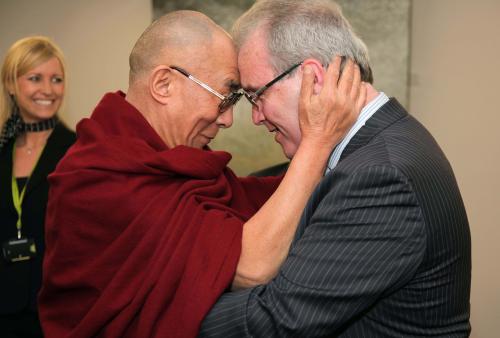 The Dalai Lama has arrived in Derry.

The Tibetan spiritual leader says he wants to promote his message of peace in the City of Culture.

He'll walk across Derry's Peace Bridge with a group of schoolchildren today before giving an address in Ebrington on the theme of compassion.

At 2 o'clock this afternoon, the Dalai Lama will give a public talk on "The Culture of Compassion" at Ebrington Plaza, as part of a City of Culture event organised by Children in Crossfire.

Before at talk, at 1 o'clock this afternoon, the Dalai Lama will walk to Ebrington across the Peace Bridge along with a group of Catholic and Protestant schoolchildren from across the city.

He will become one of the most high profile people to cross the bridge, a day after Ilex revealed that the total number of people to walk or cycle across the bridge since it opened in Juine 2011 is now more than 1.5 million.

As well as being used by 90% of residents in the city for exercise purposes, Ilex says the Peace Bridge has helped boost the city’s ranking in influential international travel guides, including Lonely Planet.