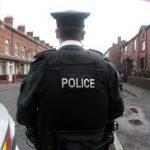 The police in Derry have recovered £25,000 in an operation against illegal gambling in the city.

Dozens of gaming machines were also seized during the planned raids.

Operation Blackjack visited 15 premises across Derry. One man has been arrested.

Around 60 police officers took part in the day long operation and they were joined by a member of the Gaming Commission from London.

They seized 60 gaming machines from a house on the Culmore Road and using a specialist cash dog, they recovered £10,000.

In follow-up searches at business premises, more gaming machines and cash were seized.

Officers also visited arcades in the city in a crackdown on under-age gambling.