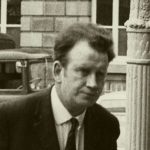 Tributes have been paid to Fianna Fail politician and business man Bernard McGlinchey, who died last evening at the age of 80.

He spent decades as a member of Donegal County Council and Letterkenny Town Council, as well as 20 years in the Seanad, between 1961 and 1981.

In 1989, he persuaded Dr James Mc Daid to join the party and enter politics, overseeing his election to the Dail within a few weeks. However, in later years, the two split, and a rivalry developed, particularly after Bernard Mc Glinchey played a pivotal role in reuniting Fianna Fail and Independent Fianne Fail. For a period, there was practically two Fianna Fail organisations in Letterkenny, but Dr Mc Daid says despite the rivalry, there was always friendship and respect...........

Bernard Mc Glinchey spent several terms as Chair of the then Urban District Council, and this morning, current Mayor Dessie Larkin joined in the tributes, saying Bernard Mc Glinchey's contribution to the growth and development of the town was immense.............

As a businessman, he founded the Golden Grill Nightclub in Letterkenny, and as a member member of the North Western Health Board, he was so involved in securing land beside St Conal's Hospital for a town park that the facility, which opened in 1999, was named after him.

While living in Dublin as a Senator, Bernard Mc Glinchey shared accomodation with fornmer Minister and EU Commissioner Ray Mc Sharry, who last night paid tribute to him, saying that for more than 50 years, he was a political tower of strength in Donegal.

Details of the late Bernard Mc Glinchey's funeral have been confirmed today.

He will repose at the Eternal Light Chapel of Rest, Mountain Top, Letterkenny from 3pm this afternoon ( Friday ) with removal at 6pm to his daughter Karen’s home in Covehill, Port Road, Letterkenny

He'll be buried in the family plot at Conwal Cemetery on Sunday after mass in St Eunan’s Cathedral at 12 noon.