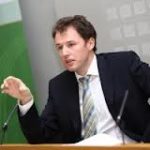 Fianna Fail Education spokesperson Charlie Mc Conalogue has urged the Education Minister to listen to teachers and not to dismiss their concerns about the impact of cuts to frontline education services.

Speaking after attending the annual conferences of the INTO, ASTI and TUI this week, the Donegal Deputy expressed concern about the increasingly fractious relationship between teachers and Minister Ruari Quinn.

The TUI is to ballot its members for industrial action, up to and including strike action.

Deputy Mc Conalogue admits his party  learned of the impact of cuts which were introduced by then education minister Mary Coughlan when his party was in government, and at this stage, it's clear that enough is enough.....