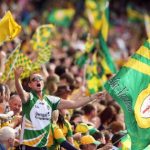 It's been confirmed that the Ulster SFC quarter-final between Donegal and Tyrone will be played in Ballybofey.

Reigning All-Ireland champions Donegal have worked hard in recent months to secure the right to home advantage since being pulled out of the hat first for the tie on Sunday May 26.

County chiefs have spent over €100,000 on redevelopment work to boost the capacity of MacCumhaill Park.

Tyrone had wanted the game played in Clones, but the Ulster Council have decided to grant the All-Ireland champions an opening title defence on home soil.

And Chairman of the Donegal County Board, Sean Dunnion says they are over the moon with the decision....

Ballyliffin Challenge to be moved from Easter Weekend