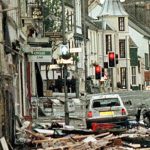 The two men found liable for the 1998 Omagh bombing earlier this week are to appeal the decision.

In a civil action taken by relatives of the Omagh victims against Colm Murphy and Seamus Daly from a Belfast High Court judge decided on Wednesday there was compelling evidence against them.

Earlier this week, the judge described the evidence against Colm Murphy and Seamus Daly as overwhelming.

The action was taken by the victims' families, who were awarded £1.6m damages.

Twenty-nine people, including a woman pregnant with twins, were killed in the Real IRA attack on the County Tyrone town in August 1998.

This afternoon a lawyer for the two men confirmed they would proceed with their right to challenge the ruling.

Previously, Mr Justice Gillen had said he recognised the scale of the terrorist outrage for which no one has ever been convicted.

January 28, 2021
Sligo Rovers have added more firepower ahead of the 2021 season. They’ve snapped up Walter Figueira from Derry City. The 25-year old scored four goals in...