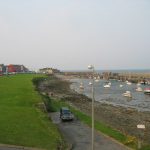 A man has drowned after he was washed off rocks at Mullaghmore Head while fishing with friends in Co Sligo.

The Bundoran RNLI lifeboat was tasked by Malin Head Coast Guard to attend the scene, but were stood down as gardaí and ambulance crew assisted the man.

The foreign national, in his 50s, was brought to Sligo General Hospital where he was pronounced dead.The Bundoran RNLI lifeboat was tasked to an incident yesterday in Mullaghmore, County Sligo.