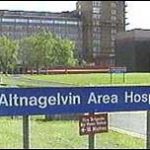 Two men have been jailed by a Derry court for separate incidents that occurred in the Emergency Department of Altnagelvin Hospital.

A man who subjected a nurse to abuse was sentenced to four months in jail while a second man,who exposed himself in the departmant, was sentences to three months.

41 year-old Sean Jarvis of 6 Primrose Street in Derry admitted a charge of disorderly behaviour at the hospital on February 12 last year.

The court was told that police were called to the emergency department where they spoke to Jarvis and noticed a strong smell of alcohol.

A nursing sister told police that he had been personal abusive towards her and at one point she thought he was going to strike her.

He was sentenced to 4 months in prison and ordered to pay £500 in compensation to the nurse he had abused.

Martin McColgan , who is 42 and of 10a Waterloo Place in Derry was charged with exposure on July 26 last.

The court was told that police were called to the hospital after reports that a man had exposed himself to a member of staff. When asked about the offence McColgan replied: "That's what she told me to do, show where it hurts."

Despite the incident the hospital staff still treated McColgan.

District Judge Barney McElholm said that it was 'an outrageous incident and sentenced McColgan to three months in prison and ordered him to sign the sex offenders register for a period of 7 years.