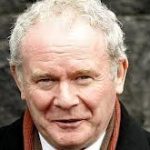 Deputy First Minister Martin McGuinness says he has been warned by police of a death threat from dissident republicans in Derry.

In a statement released this morning he said he was visited at his home by a senior PSNI officer last night to inform him of what has been described as a "real and active" threat on his life.

He said it may be linked to his condemnation of an attempted dissident mortar bomb attack in Derry, which was foiled by police earlier this week.

Police have the deputy first minister, Martin McGuinness, of a "real and active" threat against his life from dissident republicans.

McGuinness said detectives had linked the development to his condemnation of a mortar bomb found in his native Derry on Sunday night and his associated statements of support for the PSNI.

He said both himself and the PSNI were taking the threat seriously.

However MrMcGuinness said he would not be silenced and that he would continue to defend the peace process from attack from whatever quarter, be it these groups or the loyalist flag protesters over recent months.

He also said that these threats said much about the mentality of these groups, and he said that in their warped logic they somehow thought that by threatening Irish republicans and their families, they somehow advanced their case for Irish reunification.

And the Deputy First Minister concluded that he is sure a peaceful path is the one genuinely shared by republicans across Ireland.