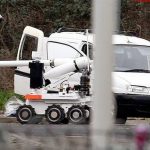 There was a heavy police presence both inside and outside Derry Magistrates Court today as two men appeared charged over the discovery of four mortar bombs in a van in Derry on Sunday night.

The men were charged with conspiring to cause an explosion, possessing explosives with intent and possession of an item likely to be of use to terrorists.

The two men acknowledged supporters as they entered the Court, and there was also scuffles outside the courthouse as the men left in cars after their appearance today.