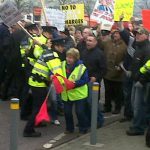 Donegal Action Against Austerity have hit out at claims from the Mayor that this weeks protest outside LYIT was a 'militant protest'.

Up to 150 people took part in a protest as the Taoiseach addressed the British-Irish Parliamentary Assembly in Letterkenny on Monday.

But, the Mayor, Frank McBrearty said such protests was bringing shame and negative publicity to the county.

However, spokesperson for DAAA, Joe Murphy, maintains that these protests have the support of the people, despite only a small crowd turning out....