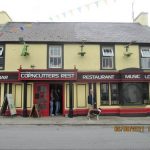 potential loss of up to 40 jobs.

Danny Lafferty owns a pub, shop and filling station in Creeslough which are now in examinership.

Last night, as many as a thousand packed the Massinass Hall where it was agreed that an extra effort to shop local would be made.

Mr Lafferty says he was humbled by the turnout but a tough time still lies ahead:
[podcast]http://www.highlandradio.com/wp-content/uploads/2013/03/danweb.mp3[/podcast]