A man, who has been picketing outside Lettekenny General Hospital, has said his 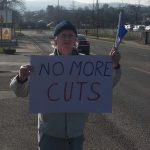 one man protest will continue until the government burns the bond holders.

Barney Duffy is in the third day of his protest against cuts to workers pay and other austerity measures he believes the general public should not have to bare.

Mr Duffy says he has received great support from the public and will continue his protest until the banks are forced to take their share of responsibility for the country's financial crisis: