A meeting of Donegal County Council was disrupted for around an hour this afternoon by protesters in the Council chamber. 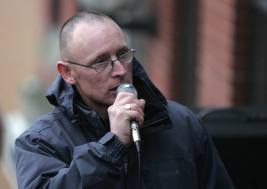 Up to 20 members of Donegal Action Against Austerity, who took part in the peaceful protest, were asked to leave by Gardai.

Donegal Action Against Austerity campaigners said the protest was taking place due to the inaction of Donegal County Councillors.

The campaigners say that Donegal County Councillors, and particularly those in government parties, are not being vocal enough in opposing cuts, new charges and new legislation.

Joe Murphy, spokesperson for DAAA said todays protest was just the beginning, and similar protests are planned for the future...

And Independent Cllr John Campbell said he agreed with their concerns.....