A protest is being held in Lifford today outside a meeting of Donegal County Council.

Donegal Action Against Austerity campaigners says they are taking the action due to the inaction of Donegal County Councillors. 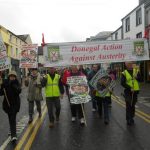 The campaigners says that Donegal County Councillors, and particularly those in government parties, are not being vocal enough in opposing cuts, new charges and new legislation.

Spokesperson Joe Murphy says the councillors are not representing those that elected them: