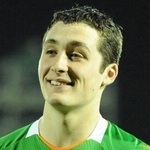 Donegal's Carl McHugh was put through his paces ahead of this weekend's league cup final - not by his coach, but in a coach!

Bradford take on Swansea in this Sunday's Capital One Cup Final at Wembley.

McHugh, from Leitirmacaward, will be hoping to once again to be a key figure for the team which would be playing European football next year if they can lift the trophy on Sunday.

But before all that McHugh tried his hand at parking the team bus...