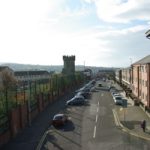 The home of an elderly couple in the centre of Derry has been damaged in an arson attack.

Police are appealing for information following the attack at Bishops Street last night.

They say at around 9pm, a petrol bomb was thrown which struck a property and set guttering on fire. Fire crews attended the scene and minor damage was caused. No one was injured.