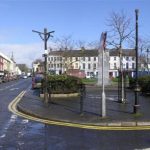 A Castlederg Councillor has called for more to be done to address the issue of anti-social behaviour following the latest incident in which a number of cars were damaged in Young Crescent area.

Several cars were damaged in a car park in the early hours of Sunday morning.

Councillor Derek Hussey is seeking a meeting with the local Neighbourhood Policing Team to address the issue and will also raise the matter at the next Strabane Police Community Safety Partnership meeting.

Councillor Hussey says these crimes are under-reported to the police and that means there isn't a proper policing response.........